The Evolution of Hacking

Saturday I posted about a series of events that led me to be in the right place at the right time. I forgot to mention this picture. It’s not my best bit of photography. I saw these things as I was driving and had to make a wide circle around several blocks to come back and take the picture, which I took through my front windscreen. (Don’t worry, I was pulled over.)
What struck me was the stories this collection of objects might be telling. A lone set of crutches leaning against a tree with two or three pairs of hockey skates at the base. Did the injury end someone’s fledgling hockey career? Or is this a random collection resulting from an annual purging of the garage?
You decide.
Share |
Posted by Cris at 3:16 PM 0 comments

Today was one of my busier Saturdays. It began with a long drive to Hamilton, NJ for a baby blessing ceremony. I had been anticipating the same kind of cold, damp, dreary weather we’ve been living with for the last week, but it turned out to be a lovely, sunny day. Good weather, as it turned out to find myself running back and forth across the Garden State Parkway.

Now, I don’t know why this is, but in five years of being a Life-Cycle Celebrant®, I have yet to have a ceremony start on time. Today’s ceremony was about an hour late. As I am currently not in the habit of double booking myself, this was okay. My only concerns for the rest of the day were for getting to the pet store before it closed.

[Addendum: I did also stop on the way to take a picture.]

It was my need for cat food that led me to get off the Turnpike on the way home in favor of the GSP—a more familiar road for me and one I consider easier when I have to go to the pet store.

And because of the cats and the late ceremony, I once again found myself the first responder at an accident. I didn’t see today’s accident happen. It must have occurred a few miles and minutes ahead of me. But when traffic backs up, I start looking and when I saw the first of the three vehicles involved had it’s airbags deployed it was time to pull over and call 911.

Let me take this opportunity to say—and I can’t emphasize this enough—always wear your seat belt. There were three families in three cars involved in this accident and I have no doubt that seatbelts and child safety seats saved their lives. The front of one vehicle was gone. The car it hit was pushed to collide with another car so those people felt the force of impact from the front and the rear. The car the middle car hit was impacted so hard the back windshield shattered. While multiple ambulances were called to the scene, I am sure it would have been worse without seatbelts.

After I made the 911 call I spent my time running back and forth between the three vehicles checking on the passengers, making sure everyone was breathing, and encouraging everyone to stay put. As none of the vehicles were smoking or on fire, the best place for the passengers was in their cars both to avoid getting hit by oncoming traffic and to prevent moving something they might not realize had been injured.

I am very grateful to the corrections officer who also stopped to assist at the scene. With one car on the right side of the road and two in the left lane, it was good to have someone with the passengers of the third car. They had already exited the vehicle when I stopped, their car was full of glass. He was able to alert the EMTs of the need for another ambulance when one of the passengers of the third car complained of back pain.

On the flip side, I am annoyed with the other motorists. At first everyone was driving past slowly. But eventually traffic began to resume a more normal pace and that was dangerous—first for those who’d been in the accident, then for me and the corrections officer, and finally for the EMTs and police who responded.

Complain as we might about rubber-neckers it is good that people slow down when passing an accident. You don’t know if someone might suddenly exit a vehicle either because they are in shock and don’t know what they’re doing or because the vehicle has caught fire. It’s also safer for rescuers. EMTs, police, and fire personnel who may have to cross traffic either in their vehicles or on foot. No matter what you’re rushing to, it’s not worth hitting rescuer to be on time.

I’m going to close this post with my hope that the people involved in the accident (six adults and five children) are all safe and well. I know this was a scary day for them.
Share |
Posted by Cris at 6:55 PM 0 comments

Thought of the Day

The things we think should go without saying are usually the things that most need to be said.
Share |
Posted by Cris at 3:30 PM 0 comments

Thought of the Day

We should not fear those who are different from us or smarter than us. But rather beware of those whose power over us is fed by those fears.
Share |
Posted by Cris at 9:34 AM 0 comments

The Beginners Guide to Self Promotion

Last weekend I watched the class of 2011 graduate from the Celebrant Foundation & Institute.  106 students and alumni received certificates and began their Life-Cycle Celebrancy practices with specialized training, a wealth of resources and a strong desire to bring their skills and talents to the world.
But how to get started? Many of us are hesitant to talk about the things we’re passionate about. We’re afraid of appearing pushy or that people may not want what we have to offer. Of course we have websites and ads and social media to get the word out, but nothing replaces face-to-face interactions—especially if your business can benefit from word-of-mouth recommendations.
This is true, not just of Celebrancy but many, if not all small businesses. So here are my tips for self-promotion.
Whether you’ve been trained in your field or built up real-life experience—if you can honestly say that you have something to offer, get comfortable saying so.
Start with telling friends and family what you want to do. It will get it out in the open, make it real, and help you develop the words you’ll use when talking to strangers.
Remember the power of word-of-mouth. Then next person you speak to may not need you but may recommend you to someone next week or next month.
Everyone gets my business card. I’ve given them to restaurant managers, doctors, nurses, dental hygienists, my mechanic, people on jury duty. I’ve left them on bulletin boards in bagel shops--and gotten clients that way!
Business cards are cheap, portable, and easily replenished. Use them up and order more. 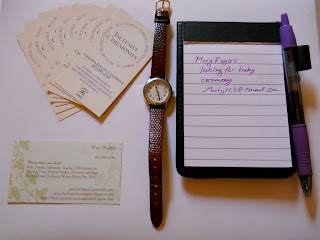