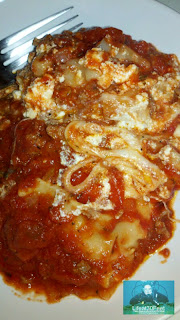 I haven't had the combination of time and energy to cook in ages. I just started a VERY short contract job and also teaching this year's Celebrant class. So today was my last chance, for a while to experiment in the kitchen.

I had seen some recipes online for lasagna cooked in a slow cooker. The proposed advantages being fewer pots needed and a long, slow, hands-off cooking time. I figured I'd give it a shot.

It is by no means my grandmother's lasagna. I cut a lot of corners, used sauce from a jar, didn't have some of the ingredients (tomato paste, oregano) I would have like to include. But, it is tasty.

What stands out the most is the consistency of the noodles. Because they go into the slow cooker dry, rather than pre-boiled, the consistency is different. The noodles melt into the other ingredients more. It's not unpleasant, but it's not my favorite part of the dish either.

I am thinking of boiling the noodles next time and cutting the time in the slow cooker. That way I can skip using the oven, but still get the regular consistency of the pasta.

I'd almost consider skipping the noodles altogether, but there is something way to decadent about a big pot of melted cheese and meat sauce... 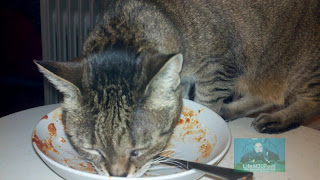 My Heroes of Hurricane Sandy

I am using my blog this week to give a HUGE thank you to everyone who worked so hard to keep people safe during Hurricane Sandy and those who are working tirelessly to put our little corner of the world back in order.

Dearest to my heart are the members of the BTUSAR Squad 86, of which my husband is the training officer and of which I have recently become a member. While I was holding down the fort at home, the men and women of the Squad were out in the winds and rising flood waters helping people escape to safety.

I'll let the press release bellow tell the rest. I am just so proud of all of them.

The first call came in about 9AM Monday morning (October 29, 2012) as winds from the leading edge of the storm system began pushing tidal waters inland, past the barrier islands and toward Berkeley Township and other Jersey Shore communities.

For the next 52 hours, as Hurricane Sandy, approached, made landfall, and passed overhead, bringing with it record tides and floodwaters that reached up to two miles inland, the members of the all volunteer Berkeley Township Under Water Search and Rescue (BTUSAR) Squad 86 worked tirelessly to rescue local residents.

Where local police and fire vehicles were unable to traverse the deepening waters and strong tidal surge, BTUSAR members came with boats and, wearing wetsuits, even waded through the chest-deep waters. They guided, carried, and ferried local residents from their flooding homes.

"We had four teams working on rotation plus our command station." Says Richard Zeller, BTUSAR Assistant Chief. "At last count, we rescued over hundred residents."

And that's not all. BTUSAR's Training Officer, Paul Skehan notes, that BTUSAR's squad house also ended up serving as a shelter for those rescued from the storm. Says Skehan, "Our team returned from a run to find a police lieutenant at the squad house with his laptop. A tree had fallen on the generators of the dispatch station and shelters were full. From that point on, the victims stayed with us until they could be bused to safety. At one point I came back from a call to find every available space filled with people sleeping or getting warm."
It's worth mentioning that Sunday night, when BTUSAR went on call gathering at the Squad House to prepare vehicles and equipment they did not expect to be activated until after Hurricane Sandy had passed. Public announcements by Governor Christie as well as communications from local officials had been that first responders would not be called to rescue those who had ignored the mandatory evacuation orders, until the storm had passed.
But in the hours after that first call Monday morning, the BTUSAR team worked tirelessly and selflessly to rescue those in Sandy's path—even as their own homes were threatened.
Says Zeller, "During this storm I've seen the best humanity has to offer and some of the worst. I want to commend our officers and crew for putting themselves on the line and making the sacrifices they did to make sure that others were safe.
When asked about finding that his own home had been demolished by a falling tree Monday night when he was on duty, Zeller responded, "I don't care. My kids, family , and friends are all safe. We helped hundreds of families and that is what matters."
BTUSAR is an all volunteer organization. They meet twice a week for training sessions covering everything from first aid to under water search and recovery. For the last two years, they have also served as the safety team at speedboat races for the Jersey Outlaws racing association.
In the aftermath of Hurricane Sandy, BTUSAR, while standing down, is still serving the community. Yesterday, Zeller and other members of the squad raised a boat that had sunk in a lagoon with 150 gallons of fuel on board. The six-hour operation not only saved the boat, but also prevented the environmental damage that would have resulted from spilled fuel. Today, and in the days to come, BTUSAR members are making themselves available for body recovery efforts.

BTUSAR Squad 86 has been serving the residents of Berkeley Township and surrounding areas since 1979. They are an all volunteer unit of trained underwater rescue and recovery divers with EMTs and commercial divers on staff. Their mission is any and all marine rescue emergency response above or below the water line and to respond to mutual aid requests in any other emergency within the realm of the unit's training.