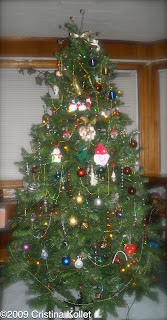 Tis the season to post about my Christmas Tree. As I've mentioned before, the tree has been up since 2009 and up until this year, it existed relatively untouched with the exception of adding new ornaments.

That was before Roger.

Roger...or ROGER! as his name is properly pronounced, came to us in February. It was the morning before a huge snow storm. I was awoken from a sound sleep just before sunrise by the sound of a cat wailing. I thought one of our pride had gotten stuck somewhere, or locked in the hall, or maybe sick. But when I went downstairs to make a headcount, I found our cats safe and sound and Paul getting dressed to go out and investigate.

He didn't have to go far. This young cat—no longer a kitten, but not full grown—was huddled under our car. By the time I got to the kitchen window, the cat had come out and was circling Paul's legs.

What followed was this quick conversation.

"You know what that means."

"The storm's coming, we can't leave him out here."

"Do you think he belongs to anyone?"

"He's friendly."
I passed some food out the window to Paul and the cat went for it.

"Should I open the back door?" 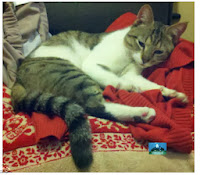 When I opened the door the cat came right in...and became ours—or we became his. You see, the rule is, if we let the pet cross the threshold, it's found a home.

We brought him up to my office, he looked around and (I swear) he sighed with relief before settling down for a nap.

What does all this have to do with the tree?

Well, at first Roger was docile. Probably because of the wound we found in his side. But once he healed he turned out to be every bit the energetic adolescent boy. He was always hungry, always getting into trouble, and always trying to get the other cats to chase him.

And once he healed completely, we learned he's a climber. That's when we learned that his name isn't "Roger" it's "ROGER!" as in ROGER! GET DOWN! 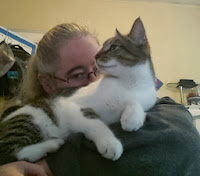 Over the last year, Roger has explored the joys of our Christmas tree. He's climbed every limb, cherry picked balls, and chased them around the house—don't worry, they're plastic. 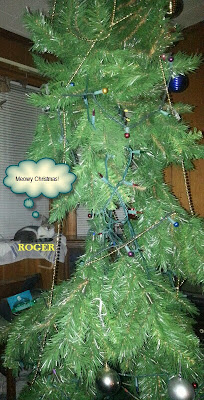 I've taken all of our more fragile ornaments off, and the special ones that were gifts were placed in a box.
Finally, with little left to pull down from the tree's branches, Roger began taking down the branches.

Here's what our tree and Roger look like today.

I don't have the heart to take it down just yet. Roger enjoys it so much.


Maybe once the holidays are over...or maybe I'll just put it back together so he can start again. After all, it makes every day Christmas for Roger.
Share |
Posted by Cris at 8:26 PM 4 comments

Because it's that time of year again...

The holiday hype started early this year. I was seeing Christmas in stores and TV commercials alongside Halloween costumes. I keep thinking back fondly to when the holiday hype didn't start till after Thanksgiving and I wonder if that was really in my lifetime.

Before the yearly opening salvos of "War on Christmas" bull start inundating the airwaves, I thought I'd share this post I wrote back in 2011.

Oh, and in case you don't follow me on Facebook, I've been plugging my Zazzle shop, as I do this time every year. I hope you'll come and check it out.