“Most Women Wouldn’t be Prepared for This”


“Most Women Wouldn’t be Prepared for This” That’s what a woman said to me at the doctor’s office last week.
She was thanking me for offering my help. She had a flat tire and I offered to fill it for her so she could at least drive it back to the rental place. In the end it turned out she didn’t need my help. She was able to get it taken care of at a nearby garage.
But as I walked back to my car, I wondered…is it true that most women wouldn’t be prepared to fix a flat? And if so, why is that?
This was actually the second time this had come up this month. A few weeks ago, my husband and I were out to dinner and as we walked back to our car another car pulled into the lot making that telltale sound—wump! Wump! WUMP!—the unmistakable sound of a very flat tire.
My husband immediately looked to where the car had gone and it took us two trips through the lot to find it. The driver was a young lady; she was out of breath, frightened, and crying on the phone to her father. She didn’t think she had a spare. It was clear that if she did, she didn’t know what to do with it. (I’ll give her this, her tire had blown and having been through that myself I know the sound of an exploding tire can be enough to startle anyone.)
We calmed her down, showed her where the spare was and changed the tire for her—both of us, Paul and I, taking turns because the nuts were very tight. We were done in minutes and sent the driver on her way with advice to replace more than just one the blown tire. 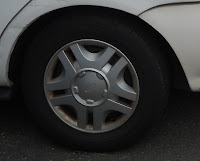 When I recounted the story to a friend later, she asked, “YOU know how to change a flat tire?”
I am surprised that this should be considered a rare pearl of knowledge for a woman to have. We raise our daughters to be independent, confident, and self-sufficient. But still, there seems to be some basic survival skills that some treat like the purview of men.
I don’t expect everyone to be as prepared as I try to be. I am well aware that my often over-preparedness is fueled by a bit of OCD and an over-developed sense of impending doom.
“The purse” (my ever present bag of holding) is well known in my circle for containing way more than most people (men or women) feel the need to carry and my car tends to be an extension of that. Right now, I’ve got a SCUBA cylinder in the trunk and a regulator with an extra hose and adapter for filling tires. It’s there because I had a flat and several weddings to get to and I wanted to be sure I could fill the tire if it went down again. Once it was in the trunk, it became part of my gear (At least till the Wookie needs the tank.)
I know my rig is overkill. But there are plenty of more conventional gadgets available to fill a flat. And even if one didn’t carry that, everyone should have a spare, know where it is, and know what to do with it. Even if you have roadside assistance, there are times and places where you might not be able to call or the wait might be too long. You might just have to change it yourself.
So why would a woman not be expected to know how to do this? I think most of the guys I know could change a flat.
Maybe it’s generational. I should keep in mind when I’m looking at my own generation, that so many of my friends’ parents are as old as my grandparents. Expectations were different when they grew up. So it’s possible that it never occurred to parents of that generation to teach their daughters to handle their own roadside emergencies.
Then again, if we never sought life-skills beyond what our parents taught us, we’d still be living in caves. There are some things that if the knowledge isn’t gifted to us, we should go out and learn for ourselves.
I don’t have kids of my own yet; we’re still working on that. But Wookie and I do talk about the things we want to make sure we teach our kids if we’re lucky enough to become parents—how to manage money, how to read a map, first aid, and CPR. I’m adding how to change a flat to that list. There are just some things that should be considered basic survival skills in our society.
Share |
Posted by Cris at 12:26 AM 0 comments

As of 22 minutes ago, it's Thanksgiving.

Things have been rough. Lots of things are not as I would like. But the scales remain tipped towards the really good things in life. And so, I am thankful for:

So in the last two weeks I turned 40 and my teaching season began again. So I haven't had much time to write, though lots to write about.

So, a picture being worth a thousand words, here are some photos that have captured my feelings of late.
(All photos © Cristina Kollet)