In Which I Remember to Think First

I can be a bit reactionary.

This is especially true when I am tired or not feeling well (as I am today) and my reactions often works in phases of worry>suspicion> righteous indignation> (return to start and repeat).  Which is why today I give myself a gold star for how I ultimately dealt with the three seemingly random text messages I received this morning--all some variation on "My prayers are with you today."

Given recent events my first thoughts were," Shit! What happened now?" I wondered, was someone hurt? Who died?

As I steeled myself to face one more horrible thing, I woke up enough to remember that people don't just text in those situations.

I stared at my phone again. No missed calls. No voice messages threatening to reveal some new doom.

I went back to the text messages again. Was it a wrong number? But there were three of them, all from different numbers.

Now, my "worry response" to perceived emergencies is to go into rescue mode. But finding nothing that needed helping/fixing/or saving, I moved into

My next thought was that this must be some kind of scam, but as far as I could tell none of the messages included a link, so how would such a scam work?

I took a moment to Google text messaging scams. I didn't see anything of relevance.

Maybe it was something else? All three messages had the same theme. Was this some massive organized attempt at proselytizing via text message?

I moved quickly towards

I realized it was Good Friday and my theory became more plausible.

I thought, "Do they expect that you will react and send a response--thus setting yourself up for an endless text conversation about how God loves you and you should join their church? "

Now I was getting pissed. Nothing raises my hackles like the arrogance of people who think I (or anyone else) need to be saved from my own spiritual beliefs.

I considered tweeting and posting on FB to see if anyone else had encountered this phenomena. In the back of my mind an angry blog post was already being composed. 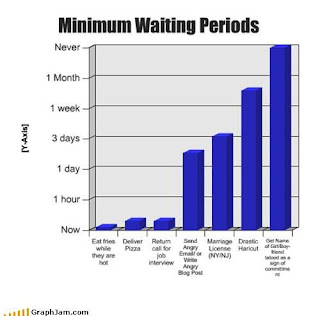 It was at about that point when put the brakes on.  Indulging in angry emails and posts usually lead to trouble. I have a system of self-imposed waiting periods specifically for situations like this.

It was time to take a step back.

I looked back at the text messages again. One was signed by a familiar name--but a common one. I decided, to Google the phone numbers. Two were unfamiliar but my search showed the numbers were local. The third, the one that was signed, was not local, but after scrolling down through the search results, I came upon a last name to go with the familiar first--a friend of my friend who was in the hospital.

That friend had sent the first text message of the day saying her surgery had been postponed and would we route for [her] Yankees as she would miss the game.

Now it all made sense. These texts were in response to her text--which I had not noticed went to a group--my response probably went out to everyone as well. --Which probably means that amidst all of those heartfelt texts that have now circulated amongst my friend's friends, everyone has probably had a moment who wonder who sent this message: