The neighbors felt it. One ran out in his socks and boxers.

My sister felt it. She described it as "awesome."

But me? Well, I was talking to Wookie and we heard the dishes rattle. I went into the kitchen to investigate the mischief but saw and felt nothing.

I thought it was the cat. What can I say? Biggles is a force of nature. 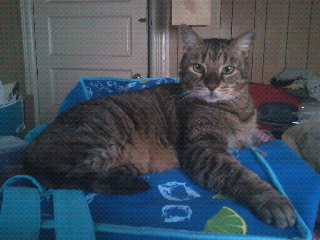 Email ThisBlogThis!Share to TwitterShare to FacebookShare to Pinterest
Links to this post
Labels: Biggles, cat, earthquake, nothing to see here

Last year I participated in a photo challenge--52 Weeks of Photos on AltDotLife. At the beginning of the 52 weeks, a list of topics (one for each week) was posted. Each week participants would submit their photos and then vote on their favorites. I even won a few times.


Well, it's starting up again--this time without the voting. Last time I didn't manage to participate every week. This time, it's my goal to submit a photo for every week.


This week's topic is Summer/Winter (depending on the participant's hemisphere). I've been carrying cameras with me all week. (Okay that's not unusual.)

Here are the photos I considered for submission this week:

This one is in NYC just outside Port Authority Bus Terminal. I had to go into the city to meet with clients and it was a lovely day, but really this was my "just in case I don't get a chance to take any pictures" picture.

Paul and I were invited to our niece's pool party. Paul is an AquaWookie by nature and so I couldn't pass up these rare photos of him in his native environment.

I love this picture of birds taking off next to the pool. But I think it's too abstract for anyone who wasn't there.
Nothing says Summer like ice cream! (But the background doesn't make this a great picture.)

This shot was good in theory but the composition and focus don't come close to what was in my head.
This is my new favorite picture of the two of us. It was one of those rare times when I managed to hold the camera just right. My friend Julia is a master of the arm-extended self portrait. I usually get the top of our heads or maybe someone's ear.

This is the picture I'll be posting for Week 1. We've had a very nice few days and this is how I want to remember the summer.

An all too Brief Hiatus and the Return of my Smile

Well, after a long week of mourning, jury duty, client meetings, a very cool social media conference, and some social media tutoring, I think it’s safe to say that I hit the wall.
For the last two days, I’ve not been able to accomplish anything.  I haven’t slept well. I’ve been feeling “off.” So, contrary to my usually push-through-till-it-gets-done philosophy, I took off yesterday and today.  I have a ceremony to write tomorrow, a house to clean, and emails to catch up on. But nothing I would have done for my clients this week would have been my best effort. So while this probably wasn’t as long of a break as I need, it’s been better than pushing through.
Scattered through my week were street fairs. Wookie was working a booth for his part-time job and I tagged along. (After losing Frankie we felt the need to stick together.)  By yesterday, I had found my smile again.
There’s something about a neighborhood street fair—that sense of community that envelops you, even if you’re not a part of that community.
The first fair was Wednesday night several towns away. It was a more professional affair with carnival games and rides. Eventually, it was called on account of rain, but I had a chance to take a few pictures before we had to pack up.

Saturday and Sunday we were at a smaller, neighborhood fair. This was a true community event. There were rides for the tiniest kids. Local women were selling delicious Spanish food to benefit the local church.
The entertainment was a mix of professional salsa bands, lip-syncing women in festive dress, and local teen talent. People cheered the performers—all of them with great enthusiasm. They brought chairs out from their homes to watch. All afternoon I saw hugs exchanged as friends found each other and people stayed and talked even when it rained.

And there was dancing in the streets.
I think that after this week—and after losing Frankie after such a long journey with her—this is what brought the smile back to me face.
Share |
Posted by Cris at 1:42 AM 2 comments

The Passing of a Little Mischief in My Life

Prelude
Sometime in the year before we were married, one of our roommates came to us asking if it would be alright for her to cat-sit a pair of kittens for a few days.  Her friend was moving, she said, and she was worried about the tiny kittens getting lost or hurt.
Paul and I laughed. Our roommate didn’t understand that she had just adopted two cats.
Time passed and the kittens stayed. The roommate would mention from time to time that it would just be a few more days. Paul and I would laugh because she still didn’t understand that she had adopted 2 cats.
Sometimes the roommate would leave for the weekend and we, I mean Paul, would feed the kittens. “Don’t get attached.” I’d say. But who was I kidding. At the time we already had four cats between us—we each came into the relationship with two. So obviously we are the type to become attached.
Time passed some more and the kittens, as they do, became young lady cats and went into heat. The roommate asked who our vet was so she could get them fixed. Paul and I laughed because once you pay for surgery, you have definitely adopted the cats.


Our wedding was fast approaching and the roommate announced she was moving out. She was going to put the cats in a shelter if she couldn’t find a home for them. Paul and I stopped laughing. We had just adopted two more cats.
Read more »
Share |
Posted by Cris at 2:31 PM 3 comments