Last The weekend of Aug. 8-9 was amazing! For one, I finally did my dives for my Rescue Diver cert.  Special thanks to Chris Muller for playing the 'distressed diver' for me. I failed to rescue him several times and when I finally did rescue him, well I hauled him out of the water and dropped him on a pointy rock. Luckily he wasn't hurt and the exercise is as much about learning strategies and our own limits as it is about succeeding in the rescue.

After the dive, Paul and I went for dinner and after that, we took an unexpected detour. When we left the restaurant, Paul spotted a hot air balloon. So we gave chase. 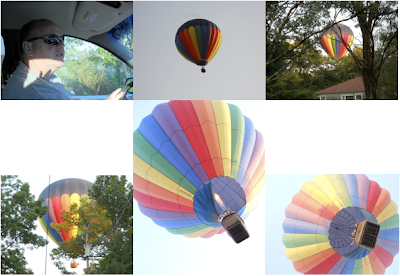 We tracked it for several miles, eventually it passed over us, and came to settle in an athletic field--but not before we had the pleasure of witnessing some impressive, precision flying as the pilot guided the balloon through the goal posts.

All this was followed by the smoothest landing we've ever seen.

If you're curious, we spoke to the pilot after and he gave us his card:
And finally, tie-dye.

The next day, my niece had a tie-dye birthday party. Everyone was issued a white t-shirt when they arrived. On a table was a few boxes of rubber bands. Gloves, buckets of dye and fixer (I think it was vinegar) waited outside. (My sister did a great job getting all this planned.)

Anyway, I had never tried it before and was excited to try my hand at it. Paul picked up a couple of adult sized Ts for me so I could try. I close with the results. 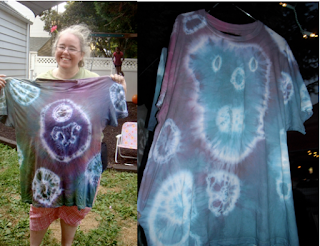