A Boat Load of Sushi

So the Wookie and I took the Mighty Jeepster to see our friend Rich this week. We ended up the evening in a place with all you can eat sushi.

I had envisioned a buffet setup, but when we arrived, we were given menus, a slip of paper, and a pencil. On the slips were printed the names of the various types of sushi rolls and tempura available.

Wookie looked at the menu and headed next door for pizza. (He rejoined us later for dessert.) Rich and I started checking off what we wanted. I had several items checked off, some with 2 rather than 1. Rich reminded me that each 1 was 6 pieces and I changed most of those 2s to 1s.

After courses of miso soup and salad, with that lovely ginger dressing that sushi places use, the waitress put this in front of us... 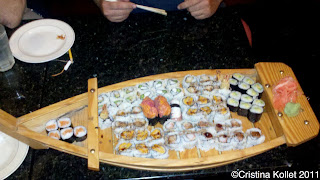 I thought for sure it had to be what both Rich and I both ordered...until the waitress said that another boat was on its way. It took me a while to stop laughing so I could eat. 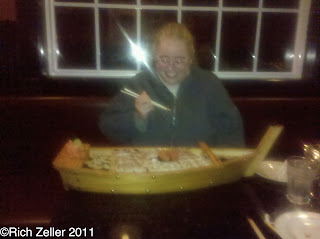 In the end, I had to admit defeat. This is as far as I got. 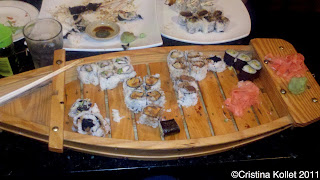 (The much more reasonable looking plates at the top of the shot are Rich's order. He was short a few pieces, but it wasn't the barge I wound up with.)

I think I need to seriously work on my math skills before I go back...but I will be back!
Share |
Posted by Cris at 1:28 AM