A New Year, A New Way

My first New Years Eve with Wookie was a cold night in 2003,standing on the New Jersey side of the Hudson River with a couple of cups of hot chocolate. The skies over the Hudson were quiet. And at midnight when the ball dropped in Times Square, I was shocked to find that I could hear the cheers of the city erupt with the new year.

It was magical and as fireworks lit the sky, I told Wookie I loved him too. (He'd been saying it since our first date, a week before on Christmas.)

This became our New Years Eve ritual for our first eight years together. Standing near that spot, on some very cold nights, waiting for the ball to drop, reflecting on our year and looking toward the future.

Over the years it became harder to hear the cheers. The night sky has become a buzz with low-flying helicopters. The skyline has changed. And our reflections have changed as well. We've had a few rough years and our conversations, as we've looked out over the black waters of the Hudson have turned to tales of survival.

We watched the fireworks saying "screw you Twenty-(Ten/ Eleven)! We survived!"  We faced the new year battle-scarred, exhausted, and more uncertain that hopeful. 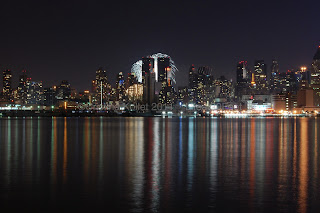 Twenty-twelve was a hard year as well. We had our high points and triumphs, but we are not anywhere near where we'd like to be,

As much as I loved that we had created a holiday tradition for ourselves, I felt that to welcome the new year in the same way would be to invite more of the same. It was time for a change.

Yesterday was an amazing day.

It started with lunch with my college roommate Aimee. We had not seen each other since graduation—twenty years ago. Looking across the table at the diner was like looking back in time, except I had Wookie sitting next to me.

Aimee and I picked up where left off. Twenty years wiser, and with families and careers of our own. Two adults, but certainly not "grown-ups"—which I am certain is something we swore never to become. So one college goal well met!

After a very fun lunch and promises to see Aimee again soon, Wookie and I set off for our next stop—my last wedding of 2012.

Patricia and Larry had been together for 45 years and were finally tying the knot in an intimate ceremony at the Grounds for Sculpture in Hamilton, NJ at The Rat's restaurant. As we gathered and got ready, I heard them say that we were actually at the site of their first date. That just made the celebration more magical.

It's hard to beat a wedding where the groom breaks out into a dance after he kisses his bride. That kind of joy is why I love being a Life-Cycle Celebrant. Wookie was by my side, and sharing that moment made it all the more special for me.

We had one more stop for the night. Instead of our usual celebration alone, Wookie and I would celebrate with friends. We continued our southerly trek through New Jersey to meet friends Rich and Debbie.

I'd never been to Atlantic City, though I'd flown over it many times. Debbie and Rich had a fabulous night planned for us. We started with a buffet at one of the casinos. Wookie and I often have very different food preferences and this place had us both very happy.

Rich has his own buffet rules. I think he summed it up as "all protein, no salad, no veggies." But I couldn't resist laying some gorgeous baby carrots (real ones with a little bit of the tops still on) and a few fingerling potatoes next to the lovely lobster I chose for my first course. When I met Wookie back at the table, he had chosen some beef medallions, that were tender enough to cut with butter knife.
Sitting across from Debbie and Rich, we had a great time. Our troubles forgotten for the night. I worked my way through two lobsters and a small bowl of duck soup (which I highly recommend!) before moving to the amazing deserts. There was chocolate mousse served in the delicate petals of a chocolate tulip—so thin that the heat of my hand holding the plate started the chocolate melting. But I really loved the tiny chocolate cup-cake with icing that I think was infused with rose essence.

I had such a good time, I didn't even stop to take pictures!

As a food coma descended across the table, we made our move for the boardwalk. Wookie and I haven't been on many double dates. I loved walking down the boardwalk, two couples, chatting and people watching.

Rich promised us good people watching and AC certainly delivers! The four of us were fairly well bundled up. I wore several layers against the winter chill, but everywhere were girls in dresses that covered about as much as my bathing suit—no coats, not even a scarf. It might have been an old fogy moment for me, but I can't remember being so impervious to cold when I was young. Though someone in our group theorized that the mass quantities of alcohol in their blood might be acting as anti-freeze.

Midnight came—celebrated prematurely by some people around us and a little late by others. At Wookie's request, we met the new year outside, looking this time out toward the dark waters of the Atlantic. We compared cell phones with Rich and Debbie. When both phones agreed it was midnight, we wished each other a happy new year!

I kissed my Wookie and as he wrapped his arms around me, I greeted the new year with hope.

Wookie and I will go far, accompanied by good friends.

Happy New Year, everyone! I hope your 2013 is full of good friends, good health, joy, prosperity, and love.