Hail to the Tree! 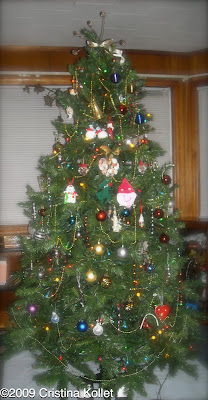 Sometimes we call it Hal (or whatever name comes to mind at the moment). Wookie refers to it as our boarder--though I can't remember it paying rent.

It makes me happy.

When 2010 rolled in and most people were taking down their trees, I decided it should stay. It's one of those things I thought of as a kid--when I'm grown up I'll be able to keep my tree up as long as I like--and you know what? I was right.

Last year, Christmas came and went again. Hal stayed his ground. I thought of taking it down over the summer but the holidays were only six months away and we'd only have to put it up again anway.

Over the last few years, the stresses and strains of adulthood have, more often than not, outweighed the advantages my childhood self expected a 'grown-up' would have. I'm sure it's the same for families everywhere dealing with unemployment, financial stress, and all that goes with it.

This tree has brightenend our home through some tough times. When our house flooded, not one drop of water touched it, even though it's in one of the rooms that saw that internal rain. This tree, in its enduring cheeriness stands as a constant reminder of the kind of fun I remember as a kid, that anticipation of good things to come and a countdown to a bright future.  It's also a reminder of one of the promises I made to myself as a child--that I might have to become an adult, but I would never be a 'grown-up.'

In fact, now that I think about it, maybe that's the one advantage to being an adult that too many of us neglect to exploit. As adults we can choose not to be grown-ups.

So I say, whatever your symbol of happiness, let it stand year' round. Keep your tree up! BBQ in your backyard in January! Wear white after Labor Day!  Find those little things that make you happy and keep doing them. Because the world can use all the happy it can get.

Email ThisBlogThis!Share to TwitterShare to FacebookShare to Pinterest
Labels: Being an Adult but not a 'Grown-up', Christmas Tree, fun, Holidays, Symbols, traditions, Tree